What is a Sinkhole?

In a geographical area featuring a type of topography known as karst, which is defined as vast areas of limestone or other soft stone that is prone to eventual dissolving due to water saturation, this natural process of dissolving can cause the formation of sinkholes. Sinkholes are a depression or hole formed in the ground once soluble rocks like limestone, gypsum or dolomite are dissolved. The area forms a depression that is then called a sinkhole. Sinkholes can range in size from a foot deep to 100 feet deep, and they can be several feet wide to much larger width spans. 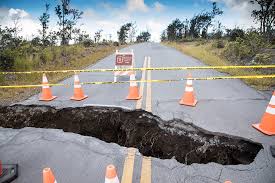 Why do Sinkholes Form?

Sinkholes form when soft rocky areas comprised of limestone, gypsum or dolomite dissolve from being exposed to water. Underground water that does not have proper drainage outlets, or huge infusions of excess rainwater that can’t properly run off can cause soft rocky terrain to dissolve, resulting in sinkholes. Most of the time, sinkholes will take years to form, but some types of sinkholes can seem as if they are a sudden, unexpected event. If sinkholes happen on private property, they become the concern of the property owner. Sometimes they create a need for professional sink hole repair.

How long does it take for a sinkhole to stop growing?

My yard is settling, do I have a sinkhole? 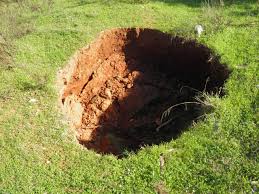 A settling yard can be one of the first early signs of impending sinkhole formation, so it’s smart to be concerned once you notice signs of settling. An actual sinkhole will be noticeable and is characterized by a hole that has been formed or by a pitted area in the yard that causes concern. Sinkhole formation is often not noticeable until an actual hole opens up and makes itself visible. If you feel that a sinkhole may be forming, do not plant things like trees and shrubbery in the area. As a precaution, you may want to have the area evaluated by a professional sink hole contractor who is trained in sinkhole mitigation so you can get a professional opinion.

I think I have a sinkhole – What should I do?

If you notice early signs of a sinkhole, including things like your home foundation appearing to be slanted, trees or fence posts that look as if they’re starting to tilt or fall over, unusual cracking in the ground, or small ponds that are formed after a rainfall, it may be time to get your property checked. You can call a licensed engineer with access to a professional geologist they can consult for evaluation, or a geological testing company. Professionals in sink hole repair can also steer you in the right direction. They can perform an evaluation to let you know if you actually are seeing the formation of sinkholes.

How do I fill a sinkhole, and do I need a permit?

If a sinkhole appears on private property, you generally won’t need a permit to fix it or to have it fixed. It’s smart to double check with 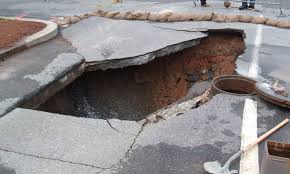 your local authorities, however, to be sure. If a sinkhole does contain groundwater, a permit may be required. A professional sink hole contractor knows the nuances of fixing sinkholes and about any permits that may be required before work begins.

Small sinkholes can be repaired by filling with a mixture of clay sand and dirt and covering with topsoil and grass. Larger sinkholes can be filled by cleaning debris like pine cones and leaves out of the hole, then filling with a layer of concrete on the bottom, covered by clay sand for drainage, and then covered with topsoil. Larger sinkholes always require professional evaluation and mitigation.

What are the 3 types of sinkholes?

The three types of sinkholes include cover-collapse sinkholes, solution sinkholes, and subsidence sinkholes. Cover-collapse sinkholes often develop quickly, sometimes in a matter of hours, and are known for their ability to cause major damage. Cover subsidence sinkholes develop more slowly and happen in areas where there are high concentrations of sandy sediment, and they can also happen in clay intensive areas. They don’t happen as frequently as other types, and because of their rarity they can go undetected for longer periods. Solution sinkholes happen in places where the limestone is exposed at the surface, and where very thin areas of dirt cover limestone. In this case, dissolving begins quickly after water hits the limestone or other soft rock. Professionals can let you know what type of sinkhole you have and the best methods to handle it.

How to repair a sinkhole?

Smaller sinkholes can be fixed by filling them in with clay sand and dirt, tamping down the dirt to be sure it’s well packed and re-planting grass at the surface. Larger sinkholes require extra steps like removing debris, smoothing the edges of the sinkhole, testing to be sure the edges and bottom of the hole are sturdy, placing a plug created from cement in the bottom of the hole, and then filling with clay sand for drainage. Finally, the hole is topped with a layer of topsoil. It’s best to consult experts in repairing sinkholes to be sure the problem is thoroughly fixed. Any damages to buildings or surrounding yard areas that were created by the sinkhole also need to be addressed.

How much does sinkhole repair cost?

A small sinkhole can be fixed for around $9,000 to $10,000. A larger sinkhole, especially when structural damage to a building is involved, can go to $100,000. It depends on the amount of damage that has occurred. Costs can be affected by factors like whether heavy machinery or any specialized equipment is required to repair the sinkhole. 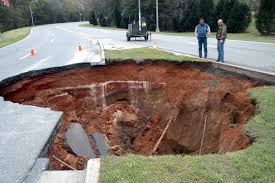 How long to repair a sinkhole?

Anywhere from a day to several days is standard for sink hole repair. A lot depends on how large the sinkhole is and how much damage it has caused. Repairing damages to a structure or to a yard can add extra time to the process.

Normally proper sinkhole repair does fix the problem. However, you have to check to make sure other areas of the yard are not starting to be affected by the beginnings of sinkhole formation. Experts can comprehensively evaluate the area. They are aware of subtle and telltale signs to look for.

Who to call for sinkhole repair?

Call a company specializing in the nuances of expert sinkhole repair and structural repair to fix damages caused by sinkholes. Many times, this will be a construction or landscaping company with extensive experience in professional evaluation of areas affected by sinkholes. Professional help is always recommended for larger sinkhole areas and for any areas where damage to buildings or foliage has occurred. It’s important to remember during any sinkhole repair that the impact of the sinkhole can be an unknown quantity, making expert help advisable.

What are some sinkhole repair methods?

Methods of sinkhole repair will vary according to the size of the hole and the stability of the ground surrounding it. Smaller holes are effectively repaired by filling the hole in using a mix of sandy gravel and topsoil. Larger sinkholes may require the placement of a cement plug at the bottom of the hole, then subsequent filling using clay sand or gravel, and then filling and topping with a layer of topsoil. In cases of very large sinkholes or areas with accompanying structural damage to buildings, the repair methods become more complicated and more costly, depending on what needs to be done.

What is the basic sinkhole repair process? 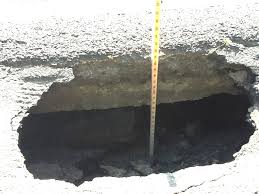 In cases of small sinkholes, basic filling will usually be sufficient to repair the hole. With larger sinkholes, or with holes that happen closer to buildings, you may need the services of professional structural engineers to determine the best methods of repair. The basic sinkhole must be filled in, and any damages to buildings or foliage must be addressed for a comprehensive solution.

Filling in larger holes requires the expertise of specialists and shouldn’t be attempted by property owners. The sides and bottom of the hole must be checked for stability and to be sure they’re sturdy before any filling in occurs. Larger holes are filled in by removing debris like leaves and twigs. Then, a cement plug is created, followed by filling in with sandy clay and gravel. A layer of topsoil can be placed on top once you’re sure the problem has been completely addressed.

We provide sinkhole repair services in the following areas

GET A FREE QUOTE TODAY!